With Instagram’s rapid growth and success for organic and paid marketers alike, it’s no surprise that Instagram quietly launched a new placement last week where advertisers can now target the IGTV ad placement. As Instagram use continues to grow, an increased demand for impression inventory is necessary for the tech giant and for advertising brands to scale in parallel. Facebook’s ad ecosystem now has twenty ad placements in total and it was due time for Instagram to get some more of its own. Learn more about the new Instagram IGTV ad placement, where to find it, and how to use it.

Instagram launched IGTV initially in June 2018 as another video component to the Instagram app across both iOS and Android devices. With IGTV, people can create, share, and watch longer videos in comparison to Instagram’s other placements such as the Feed, Stories, and REELS.

With organic IGTV videos, users can upload up to 15 minutes of content from their mobile devices and up to 60 minutes when uploading from the web. Many brands have been testing teaser videos in their Feed posts and then linking to IGTV to watch longer-form content and that has helped boost IGTV usage over the last couple of years since launch. When IGTV first launched, it didn’t seem to take off very quickly, which was quite possibly because its initial launch was overshadowed by the simultaneous close launch of Stories, which did quickly take off. In the last year or so, there seemed to be a secondary boost in IGTV promotion and usage which seems to have been more effective in driving viewers to that part of the platform.

Campaign Objectives to Use with IGTV Ads

Like most new features and product offerings on Facebook’s advertising network, the new IGTV ad placement is only available in a few campaign objectives which include awareness, reach, and video views. Once you select the campaign objective, head over to the ad set level under placements to either run automatic placements that also include IGTV or manually select which placements you would like to run your IGTV in-stream video ad in. One caveat to manually selecting IGTV is that you can only use it if you also select the Facebook In-Stream Videos or the Instagram Feed placement. 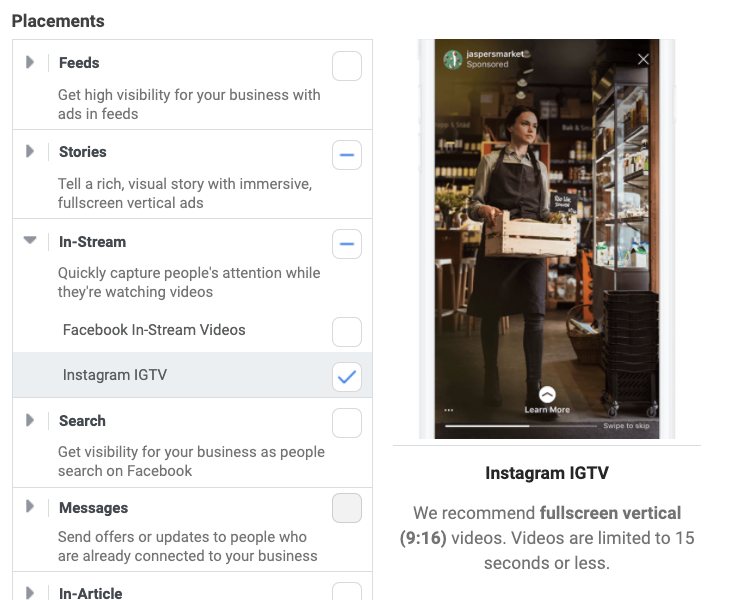 While Facebook has yet to update its specifications resource center for the new IGTV ad placement, we do know that they recommend designing vertical full screen videos with a 9:16 ratio. As for the video file type, mp4 file formats are accepted for all other placements and are the only accepted file format for organic IGTV video uploads, so it’s safe to assume that’s what we should continue abiding to here.

When it comes to video duration, this new ad placement accepts video content that is up to 15 seconds in duration. Compared to Facebook, Instagram placements have historically been shorter as users tend to digest content quickly on the visually-compelling platform.

Getting Started with IGTV Ads

While this launch has been quiet, resources are limited, and the rollout across accounts is coming about slowly, take a look at your account(s) and see if you have it available yet. If so, add the new Instagram IGTV ad placement into the mix and begin testing to see what initial results look like before it becomes a more expensive, competitive, and saturated ad placement over time.

Regardless of your budget, test IGTV ads out with your various audiences using the reach and awareness campaign objectives as those are the lowest in cost and get your brand, products, and services in front of more people. Plus, it’s new, Instagram wants its revenue, usage, and performance data, too, so don’t be surprised if you get a nice extra – though temporary – little price cut as a courtesy before the competition heats up.

Since lower funnel campaign objectives such as traffic and conversions are not yet available for this placement, don’t be afraid to test any of the three available objectives with your warmer audiences, too, as it can help keep your brand and offerings top of mind if your audiences see you advertising on IGTV. See how the exciting new placement performs, how long people view your video content here compared to other placements, and if anything, you can use these video viewers to retarget to later by setting up a custom audience.

Keep an eye out and begin thinking about content and strategies around REELS ad placements, too, as we should be prepared for those launching sometime – hopefully – later this year. 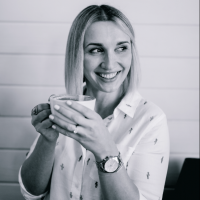 As someone who lives for connecting people, bringing together consumers and brands is what Akvile DeFazio, President of AKvertise, Inc., a social media advertising agency, does best. Born in Lithuania, she later emigrated to Toronto to escape the Cold War, grew up in upstate New York, lived in a few other amazing cities along the way, and planted roots with her husband and their dog in the beautiful city of Paso Robles in Central California.